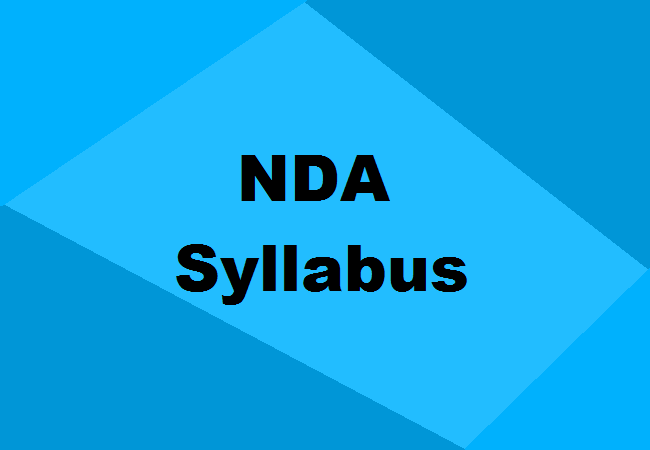 Union Public Service Commission (UPSC) has already been released the notification for National Defence Academy (NDA) Recruitment 2021. Aspirants who are looking for an entry in Defence Forces like Army, Navy, and Air Force Departments. UPSC has conducted a National level exam for NDA across India. The exam will be held on 2 times every year for NDA-1 and NDA-2.

Candidates who interested to secure their career in Indian Defence Services should have to start their preparation now. The Admit cards for NDA-2 will be released soon. For more details, candidates can check the official website @ upsc.gov.in

In this article, we provided the complete Syllabus and Exam pattern for all desired candidates. You can go through below to find the details of the exam, selection procedure, Exam Pattern, and Syllabus of NDA 2021.

NAD-II 2021 notification has closed in July. The exam will be conducted on April 21st, 2021. Here we have given the exam details clearly one check the table below.

(a) Nationality:  A candidate must be an unmarried male and must be

(I) a citizen of India, or (ii) a subject of Bhutan, or (iii) a subject of Nepal, or (iv) a Tibetan refugee who came over to India before the 1st January 1962 with the intention of permanently settling in India, or (v) a person of Indian origin who has migrated from Pakistan, Burma, Sri Lanka and East African Countries of Kenya, Uganda, the United Republic of Tanzania, Zambia, Malawi, Zaire, and Ethiopia or Vietnam with the intention of permanently settling in India. Provided that a candidate belonging to categories (ii), (iii), (IV), and (v) above shall be a person in whose favor a certificate of eligibility has been issued by the Government of India. A certificate of eligibility will not, however, be necessary in the case of candidates who are Gorkha subjects of Nepal.

(b) Age Limits, Sex and Marital Status: Only unmarried male candidates born not earlier than 02nd January 2000 and not later than 1st January 2003 are eligible. The date of birth accepted by the Commission is that entered in the Matriculation or Secondary School Leaving Certificate or in a certificate recognized by an Indian University as equivalent to Matriculation or in an extract from a Register of Matriculates maintained by a University which must be certified by the proper authority of the University or in the Secondary School Examination or an equivalent examination certificates. These certificates are required to be submitted only after the declaration of the result of the written part of the examination. No other document relating to age like horoscopes, affidavits, birth extracts from Municipal Corporation, service records, and the like will be accepted. The expression Matriculation/ Secondary School Examination Certificate in this part of the instruction includes the alternative certificates mentioned above.

Latest Update: The UPSC NDA Syllabus PDF download link is given at the end of the post

(i) For Army Wing of National Defence Academy: 12th Class pass of the 10+2 pattern of School Education or equivalent examination conducted by a State Education Board or a University.

(ii) For Air Force and Naval Wings of National Defence Academy and for the 10+2 Cadet Entry Scheme at the Indian Naval Academy: 12th Class pass of the 10+2 pattern of School Education or equivalent with Physics and Mathematics conducted by a State Education Board or a University. Candidates who are appearing in the 12th Class under the 10+2 pattern of School Education or equivalent examination can also apply for this examination. Such candidates who qualify for the SSB interview but could not produce Matriculation/10+2 or equivalent certificate in original at the time of the SSB interview should forward duly self attested Photocopies to ‘Directorate General of Recruiting, Army HQ.

The selection will be done in 2 stages:

Candidates should note that there will be a penalty (Negative Marking) for wrong answers marked by a candidate in the Objective Type Question Papers.

The Mathematics paper covers the following chapters and topics:

Algebra: Complex numbers – basic properties, modulus, Conversion of a number in decimal system to binary system and vice-versa, Arithmetic, argument, cube roots of unity, Geometric and Harmonic progressions, Solution of linear inequations of two variables by graphs, Representation of real numbers on a line, Binary system of numbers, Binomial theorem and its application, Quadratic equations with real coefficients, Permutation and Combination, Logarithms and their applications.

Vector Algebra: Vectors in two and three dimensions, scalar multiplication of vector, scalar product or dot product of two-vectors, Applications-work did by a force and moment of a force, and in geometrical problems, magnitude and direction of a vector, Unit and null vectors, addition of vectors, Vector product and cross product of two vectors.

Matrices and Determinants: Types of Matrices, Determinant of a matrix, adjoint, and inverse of a square matrix, operations on matrices, Applications – Solution of a system of linear equations in two or three unknowns by Cramer’s rule and by Matrix Method, basic properties of the determinant.

Analytical Geometry of two and three dimensions: Distance formula, Equation of a circle in standard and in general form, Ellipse and hyperbola, Angle between two lines, Rectangular Cartesian Coordinate system, Equation of a line in various forms, Standard forms of parabola, Distance of a point from a line, Eccentricity, and axis of a conic.

The general ability section comprises of two parts which are mentioned below:

The English syllabus covers topics like vocabulary, Grammar, and usage, comprehension, and cohesion in extended text to test the candidate’s proficiency in English.

The question paper comprises of general knowledge and covers the subjects that include Physics, Chemistry, Social Studies, General Science, Geography, and Current Events.

Basis of Life – Cells, Protoplasms and Tissues, Constituents of food, Balanced Diet, Achievements of Eminent Scientists, Difference between the living and non-living, Elementary knowledge of the human body and its important organs, Food – Source of Energy for man, Growth and Reproduction in Plants and Animals, Common Epidemics, their causes and prevention, The Solar System – Meteors and Comets, Eclipses.

Origin of Earth, Weathering – Mechanical and Chemical, Earthquakes, and volcanoes, Atmosphere and its composition, Temperature and Atmospheric Pressure, Rocks and their classification, Planetary Winds, cyclones and Anti-cyclones, Humidity, Condensation and Precipitation,  Major Natural regions of the World, Important Sea ports and main sea, land, and air routes of India. Main items of Imports and Exports of India, Types of Climate, The Earth, its shape and size, Latitudes and Longitudes, Concept of time, International Date Line, Movements of Earth and their effects, Ocean Currents and Tides, Regional Geography of India – Climate, Natural vegetation. Mineral and Power resources, location, and distribution of agricultural and industrial activities.

Current important world events, Knowledge of Important events that have happened in India in recent years, prominent personalities – both Indian and International including those connected with cultural activities and sports.

It is not compulsory that the topics mentioned above will surely come in the examination. The question paper does not remain consistent, it changes every year. It may happen that the question paper will consist of the topic not discussed here.

What are the subjects Included in NDA exam?

UPSC Notification will be released on its Official Website