Pradhan Mantri Nai Manzil Scheme Nai Manzil is a new initiative of the Government. It was launched on 8th August 2015 at Patna, Bihar. The Scheme aims to benefit the minority youths who do not have a formal school-leaving certificate, i.e those in the category of school- dropouts or educated in community education institutions like Madarsas, in order to provide the formal education and skills and enable them to seek better employment and livelihoods in the organized sector.

The Scheme has been approved with the cost of Rs.650.00 Crore for five years with 50% funding from the World Bank. The World Bank has approved the funding of US$50 million. This is the first World Bank-supported program for minority welfare in this Ministry. The scheme is also significant as it combines education with skills for school dropouts which will significantly enhance their employability. 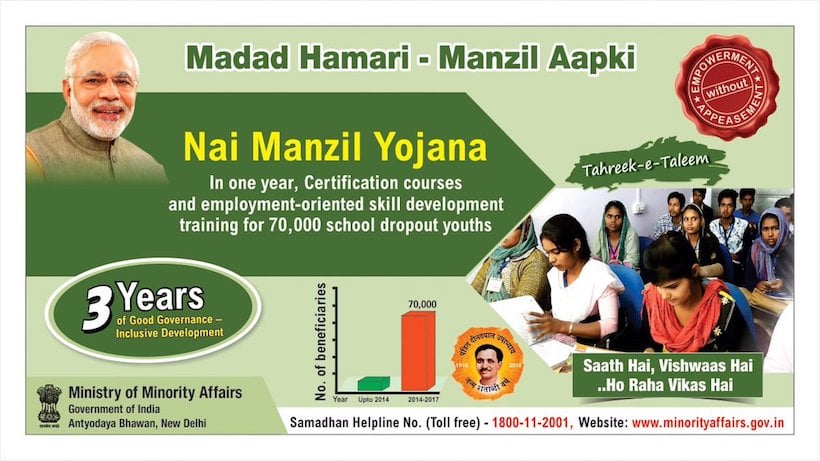 The scheme is being implemented by the Project Implementing Agencies (PIAs) who provide non-residential integrated education and skill training for 9 to 12 months, of which a minimum of 3 months be devoted to skill training compliant with the National Skills Qualifications Framework (NSQF). After completion of skill training according to the defined framework, the beneficiaries will be placed in jobs appropriate to their qualifications.

School dropout minority youth from BPL families in the age group of 17-35 years. The minority beneficiaries are to be covered mainly from 1228 Minority Concentrated Blocks (MCB) where the minority population is 25% or more. Certain particular pockets of concentration of minority population within non-minority districts or cities will also be eligible for consideration. In order to promote inter-community solidarity, 15% of candidates belonging to BPL families of nonminority communities will also be considered. The scheme envisages benefiting about 1,00,000 minority youth in five years. 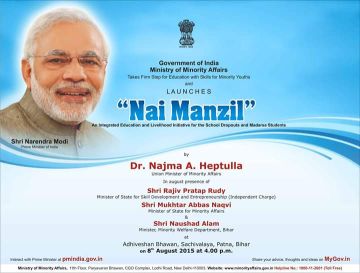 The project at the ground level is implemented by Project implementing agencies (PIAs) selected from amongst private (both profit and not for profit) and/or government agencies. A Steering Committee (SC) was constituted to provide overall supervision and guidance to the Project Management Unit (PMU) established by MoMA for managing project implementation. A Technical Advisory Committee (TAC) is also constituted to provide need-based advice on curriculum, outreach, social inclusion & gender equality, IEC & networking, and collaboration with CSOs & community leaders.

The approach of the Scheme:

The implementation approaches of the Project are as follows:
i. The present project is a pilot and would include a number of activities that will enable the government to learn strategies and for education and skill training for Minority Communities in India. It would create a baseline assessment analyzing the economic and social background of each family etc.
ii. It is to be implemented throughout the country in a phased manner. Minority concentration areas would be the main geographical target.
iii. Registered Company /Firm/ Trust/ Society and/or Government Programme
Implementing Agencies (PIA) would be appointed for the purpose.
iv. Innovation would be encouraged by the Project at every level to bring about equity in terms of educational outcomes and employability of the Minorities keeping in mind their social and economic conditions.
v. The Project would be implemented by a Project Management Unit (PMU) to be based in the Ministry of Minority Affairs headed by a Joint Secretary from the Ministry. He/She will be assisted by a team of experts hired from the market to look into different components of the Scheme

The strategy of the Scheme:

Mobilization: Minority Below Poverty Line (BPL) youth in the age group of 17-35 years who are school drop-outs are the main target population under the Scheme. They will be mobilized through various strategies appropriate to their culture. Advocacy / Information, Education & Communication (IEC) and awareness generation programs will be designed and implemented at the macro level by the Ministry and at the micro-level in the project areas by the PIAs. The women trained under “Nai Roshni”, the Ministry of Minority Affairs‟ scheme for leadership development of Minority women, will also be used as mobilizers for this scheme. Similarly, community-level structures like Self Help Groups (SHGs) could also be used to mobilize youth. The primary catchment area for beneficiaries under this scheme will be the 1,228 Community Development Blocks where the Minority population is 25% or more of the total population as identified by the Ministry of Minority Affairs. Additional catchment areas beyond these Blocks may also be notified by the Steering Committee for the implementation of this scheme in consultation with the State governments.

Identification and Selection: The youth mobilized under the Scheme will be provided appropriate counseling which will help the PIA to do a pre-selection screening of the candidates to identify appropriate support in terms of education and skilling. This will also form the database for the baseline

Placement: After successful completion of training, the PIAs will facilitate the placement of trainees in jobs for wage employment. It is mandated that a minimum of 70% of the youth trained under the project should be successfully placed within three months of completion of training. An attempt will be made to place them in organized industries, however, in case this is not possible, it will be ensured that their wage is above the basic minimum wage at the state level and they get other benefits like Provident Fund, ESI, Paid leave, etc

The scheme will provide non-residential integrated education and skill training program for 9 to 12 months of which a minimum 3 months should be devoted to skill training. It is expected that the training delivery under this scheme will be fully integrated, with various components described being offered in parallel to each candidate over the duration of training

A Basic Bridge Program will be offered to beneficiaries that will result in a certification from
the National Institute of Open Schooling (NIOS) or any other State Board that offers open schooling. Depending on his / her eligibility, a beneficiary will undergo the Open Basic Education (OBE) level „C‟ course which is equivalent to Class VIII or the Secondary Level Examination Program of NIOS / State Board which is equivalent to Class X. The assessment and certification will be as per NIOS / State Board norms. This will also be supplemented with periodic regular internal assessments conducted by the PIA/PIAs to track the learning progress. In case a candidate fails to pass the Open Schooling Examination in the first attempt, he/she will be encouraged to take more attempts (NIOS allows each student to take nine attempts in five years to clear Class X).

The program will be rolled out across all regions in the country. The total physical target of training approximately 100,000 minority candidates under the program will be phased over the implementation period of 5 years. It is expected that about 2% of the target will be covered in the first year, and the remaining distributed over the following years.

Eligibility of Programme Implementing Agencies (PIAs)
(i) PIAs will be invited to participate in the Scheme. The selection of PIA would be subject to a rigorous process of appraisal and due diligence as laid down in the Criteria for Selection of PIAs. Below is a tentative list of the types of institutions that will be selected as PIAs under the Project:
a) Government or Private ITIs affiliated to NCVT or SCVT
b) Schools / Institutes approved by Central or State Boards of Secondary Education or Open Schooling (or equivalent).
c) PIA should have a turnover of at least Rs. 15 Crore in preceding 3 financial years and should have at least trained 500  trainees per year in last 3 years for empanelment.

This is a 100% Central Sector Scheme and will be implemented by the Ministry directly through impaneled eligible organizations. The full cost of the approved projects as per prescribed financial norms would be borne by the Ministry.

Management Information System (MIS)
a) A web-based online Management Information System (MIS) will be developed by the Ministry of Minority Affairs consisting of several details such as:
(a) Students‟ enrolment records
(b) Teachers‟ profile
(c) Monthly attendance records
(d) Dropouts and reasons
(e) Assessment reports for monthly tests
(f) Re-enrolment of students, if any
(g) Placement tracking data
(h) Issues identified during monitoring visits and their rectification
(i) Any other item suggested by the Ministry of Minority Affairs

The PIAs will be responsible for furnishing the records as required by the MIS inappropriate electronic and/or hard copy format on a periodic basis and comply with all requirements as may be set therein. The PIAs will have to maintain participant-specific information and meet all applicable reporting requirements. The regularity and quality of entry of information will be prescribed by the Ministry as required.

The CCTV recording of training programs will be maintained by PIAs for record purposes and cross-checking. The Bio-metric attendance (Aadhar-based) and GIS tagging of centers will also be done by PIA.

The MIS portal will also allow online application by candidates who wish to avail of the benefits under this scheme, and by mobilizers who wish to register such candidates as beneficiaries. The MIS portal will also be publicized widely as part of the advocacy efforts of the scheme and will be made available through the Common Service Centres (CSCs) of the National e-Governance Plan (NeGP) and National labor Market Information System (LMIS) which is being developed by the Ministry of Skills Development and Entrepreneurship.

The Project Management Unit (PMU) will conduct overall monitoring and evaluation of the scheme including the project appraisal, annual benchmarking surveys, etc. In addition, the State Government will have a right to inspect the projects. The inspection report will be submitted to the Ministry by the State Government in the prescribed format. Third-party monitoring by independent agencies may also be envisaged. The release of 2nd Instalment would be linked to the outcomes monitored by PMU.

Ministry of Minority Affairs may authorize the PIA or any other Agency to conduct concurrent monitoring and random checking of physical and financial reports on the MIS. The training centers would be geo-tagged so that their location is readily available on Google Maps. The inspection team can directly reach the center without any local assistance. Also, the same data can be put up on the MIS portal, which can be used by candidates to search for a center in their vicinity. The MIS will also have a special feature by which the visiting team can directly upload photos of the center visited. The information gathered from this will be fed into the decision-making process for further sanctions and the release of funds under the Scheme. Monitoring may entail random visits to training centers and validation of:
a) Presence of minimum infrastructure supposed to be present as per due requirements.
b) MIS entries by utilizing appropriate methods to certify the veracity of beneficiaries.
c) Facts about training, placement, and retention of those candidates from the residing area who were trained under the scheme by meeting the beneficiaries and/or members of the beneficiaries‟ family.
ii. The Ministry may also engage specialized agencies in the field of education and skill development through the PMU set up for the purpose of Knowledge Partner(s) as and when necessary.

Click Here to know more details regarding the scheme