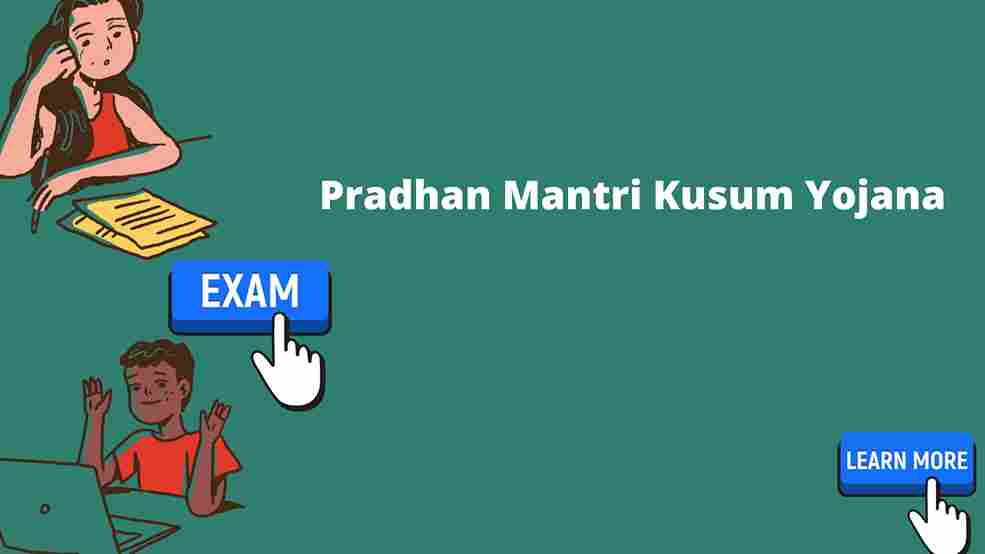 Pradhan Mantri Kusum Yojana 2022 As a part of Intended Nationally Determined Contributions (INDCs), India has committed to increasing the share of installed capacity of electric power from non-fossil-fuel sources to 40% by 2030.

Pradhan Mantri Kusum Yojana While Large Scale Solar power generation projects are being installed to achieve the ambitious target of 100 GW of Solar Power generation by 2022, it has been planned to simultaneously develop decentralized Solar energy and other renewable energy generation Plants of capacity up to 2 MW which could be connected directly to existing 33/11 kV or 66/11 kV or 110/11 kV sub-stations of Distribution Company, thus saving in transmission system requirement apart from T&D losses. Such plants near these sub-stations may be developed, preferably by farmers,
giving them an opportunity to increase their income by utilizing their barren and uncultivable land for solar or other renewable energy-based power plants. Cultivable land may also be used if the Solar plants are set up on stilts where crops can be grown below the stilts and sell RE power to DISCOMs. 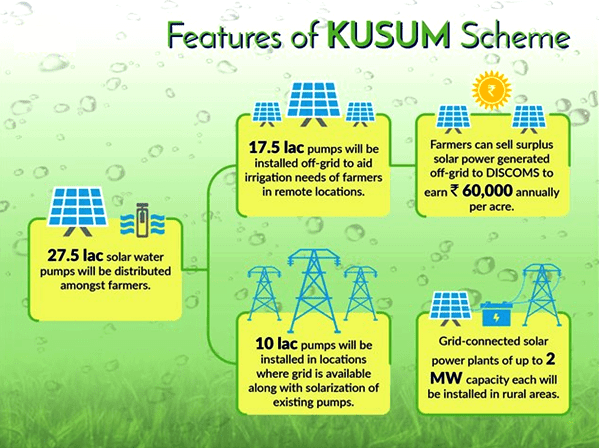 Besides, developing decentralized renewable power, it is planned to replace Agriculture Diesel pumps with Solar Water pumps and Solarise Grid-connected Agriculture pumps. At present, over 30 million agricultural pumps are installed in India, out of which nearly 10 million pumps are diesel based. The Distribution Companies (DISCOMs) are not in a position to energize these pumps through grid connection as seen from the long waiting lists with such Distribution Companies. Hence there is a need to provide energy to these pumps through solar energy. Also, over 20 million grid-connected agriculture water pumps installed in the country consume more than 17 percent of the total annual electricity consumption of the country. Solarization of the same can reduce the dependence of these pumps on conventional sources of energy supplied by DISCOMs and thus reduce their burden of subsidy on agriculture consumption of Electricity Pradhan Mantri Kusum Yojana.
This will also provide an additional source of income to farmers who will be in a position to sell
the surplus power to DISCOMs. The new Scheme has provisions for the decentralized renewable energy plants, Solar agriculture water pumps, and solarisation of existing Grid-connected Agriculture pumps.

These guidelines have been formulated to provide a broad implementation framework of the Scheme.

I.Component A: Setting up of 10,000 MW of Decentralized Ground/Stilt Mounted Grid Connected Solar or other Renewable Energy-based Power Plants

Under this component, solar or other renewable energy-based power plants (REPP) of capacity 500 kW to 2 MW will be set up by individual farmers/groups of farmers/ cooperatives/ panchayats/ Farmer Producer Organisations (FPO)/Water User associations (WUA) hereinafter called Renewable Power Generator (RPG). However, States/DISCOMs may allow setting up of solar or other renewable energy-based power plants of capacity less than 500 kW in specific cases. The REPP will be preferably installed within five km radius of the sub-stations in order to avoid high cost of sub-transmission lines and to reduce transmission losses Pradhan Mantri Kusum Yojana.

The distribution companies (DISCOMs) will notify sub-station-wise surplus capacity which can be fed from such RE power plants to the Grid and shall invite applications from interested beneficiaries for setting up the renewable energy plants. The renewable power generated will be purchased by DISCOMs at a pre-fixed levelised tariff. In case, the aggregate capacity offered by Applicants is more than notified capacity for a particular sub-station, the bidding route will be followed by DISCOMs to select a Renewable Power generator and in such cases, the prefixed levelised tariff will be the ceiling tariff for bidding. The selection of bidders will be based on the lowest tariff offered in the ascending order as quoted by the bidders in the closed bid or reverse auction as the case may be. A model PPA (Power Purchase Agreement) to be executed between RPG and DISCOMs has been prepared by MNRE and attached at Annexure-I. The duration of PPA will be 25 years from the Commercial Operation Date (COD) of the project. The total energy purchased from these RE plants will be accounted for the fulfillment of RPO by the DISCOM. 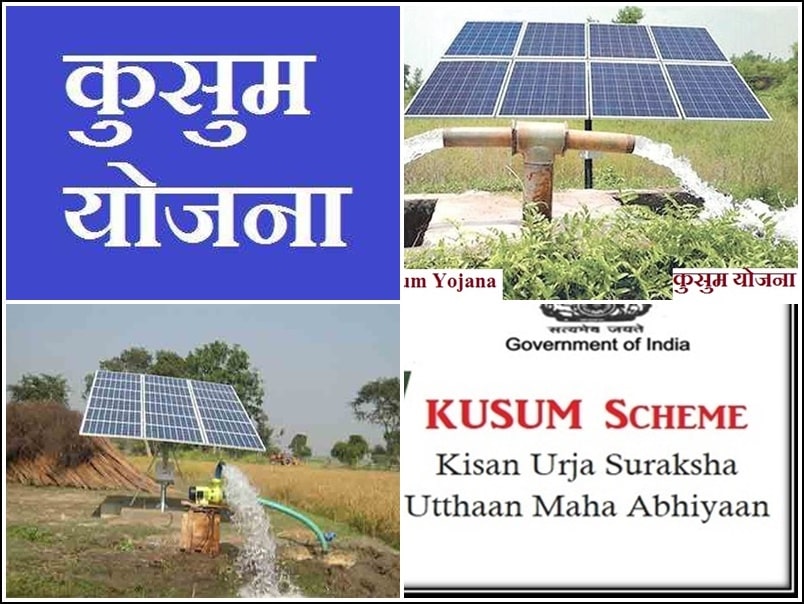 In case the farmers/ group of farmers/ cooperatives/ panchayats/ Farmer Producer Organisations (FPO)/ Water User associations (WUA) etc. are not able to arrange the equity required for setting up the REPP, they can opt for developing the REPP through developer(s) or even through local DISCOM, which will be considered as RPG in this case. In such a case, the land owner will get lease rent as mutually agreed between the parties. The lease rent may be in terms of Rs per year per acre of land or in terms of Rs per unit of energy generated per acre of land area. The farmer(s) may opt for payment of lease rent directly in their bank account by the DISCOM, from the payment due to the developer. A model Land Lease Agreement to facilitate the beneficiaries has been prepared by MNRE Pradhan Mantri Kusum Yojana

However, the terms of the Land Lease Agreement may be finalized on mutual consent of the concerned parties. The REPP under the scheme would be implemented primarily on Barren/uncultivable land. Agricultural land is also permitted under the scheme provided that solar plants are installed in a stilt fashion (i.e. raised structure for installation of Solar panels) and with adequate spacing between panel rows for ensuring that farming activity is not affected. The RPG would be free to adopt any renewable energy source or technology while responding to the bid. However, in the case of cultivable land with solar plants, the same may be installed on stilts, so that the farmers continue to cultivate the land, apart from getting the benefit of lease rent. In such a case DISCOM may also float bids (in case of specific substations) where setting up of solar projects on stilts may be mandatorily required, and bids for energy tariff invited accordingly.

DISCOMs/ Agricultural Department/ Minor Irrigation Department / any other Department designated by State Government will be the implementing agencies for this component. 2% of the eligible CFA will be provided as service charges in totality to all the agencies involved in implementation including the designated State Implementing Agency. Part of service charges (to be decided by MNRE) shall be given to the central agency for centralized tendering. Additionally, some part of the service charge may also be retained by MNRE for nationwide centralized IEC activities.

Implementing agencies will submit proposals through online portal to MNRE for approval. Offline proposals will not be accepted, unless MNRE has given a general exemption from the requirement of online submission to any agency for any specific period of time. Proposals for new installations will only be considered by the Screening Committee. Proposals wherein the systems have already been installed/ under installation will not be considered for approval under the Programme by the Screening Committee.

There will be centralized tendering of solar water pumping system through Central PSUs. These CPSUs will carry out tendering process as per Guidelines and standards & specifications issued by MNRE. Any deviation shall normally be not permissible except in specific cases with the approval of Secretary, MNRE.

For centralized tendering the designated CPSUs may come out region-wise/State-wise tenders, however, their role will be limited to selection of bidders and discovery of rates. To ensure quality and post installation services only manufacturers of solar water pumps or controllers or manufacturers of solar panels would be allowed to participate in the bidding process. Normally, three bidders would be selected and they have to match L1 rates and the quantity allocated to those who agree to match the L1 rates them would be 50%, 30%, and 20% of the total tender
quantity respectively in the ascending order of rates quoted by them. Number of bidders
selected may vary depending upon the tender quantity. The selection of beneficiaries and implementation of scheme would be the responsibility of the State Implementation Agency.

Cluster based approach would be used for allocation of districts to the selected bidders to optimize the resources and ensure quality services made available to the farmer. As far as possible contiguous districts would be allotted to the successful bidders, with the total requirements of pumps in the allocated area matching the quantity allotted to them.

Installation of 17.5 lakh Stand-alone Solar Water Agriculture Pumping Systems will create
solar PV capacity of over 8000 MW. Since pumps are generally used for 150 days in a year, this capacity can be optimally utilized by using Universal Solar Pump Controller (USPC), through which farmer can use solar power for other activities like operating chaff cutter, floor mill, cold storage, drier, battery charges, etc., and increase his income. Option would be given to the farmer to opt for USPC and additional cost of solar PV pumping system with USPC  would be discovered by the tendering agency. The entire additional cost for solar pumping system with USPC would be borne by the farmer. States/UTs may bear this additional cost to facilitate use of solar energy for other activities and increasing the income of farmers.

In all cases, the successful bidder shall provide AMC for five years from the date of installation,
real time monitoring, helpline, district level service centres and comply standards of performance in dealing with complaints/redessal mechanism.

The Implementation Agency would also be responsible for carrying out publicity of the scheme so as to increase awareness amongst potential beneficiaries. For this purpose, apart from their own publicity content, they shall also be guided by advice of MNRE on this matter

Funds up to 40% of the applicable CFA for the sanctioned quantity would be released as advance to the implementing agency only after placement of letter of award(s) to the selected vendors. The implementing agencies may pass on this fund to the selected vendors in different stages on achievement of various milestones as per terms and conditions of letter of award(s). Second installment up to 30% of the applicable CFA would be released on submission of UCs and SoE for the first release. The balance eligible CFA along with applicable service charges would be released on acceptance of the Project Completion Report in the prescribed format, Utilization Certificates as per GFR and other related documents by the Ministry.

Click Here to know more details regarding the Yojana