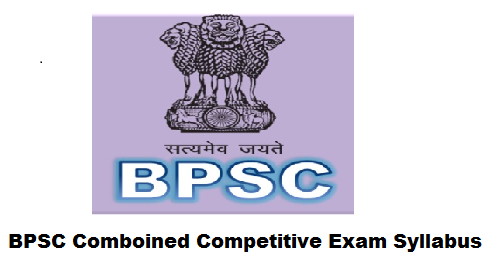 The paper on General Studies will include questions covering the following fields of knowledge:-

The paper will comprise of questions on:

In General Studies paper-I, Modern History of India and Indian Culture will cover the broad history of the country (with special reference to Bihar) from about the middle of nineteenth century. The modern history of Bihar will include questions on the introduction and expansion of western education (including technical education). It will also have questions on Bihar’s role in the freedom struggle of India. Questions will relate to the Santhal Uprising, 1857 in Bihar, Birsa movement, Champaran Satyagrah and the Quit India Movement 1942. A knowledge of the chief features of Mauryan and Pal art and Patna Qulam painting will be expected from the examinees. It would also include questions or Gandhi, Tagore and Nehru. The part relating to statistical analysis, graphs and diagrams will include exercises to test the candidate’s ability to draw common sense conclusions from information presented in statistical, graphical or diagrammatical form and to point out deficiencies, limitations or inconsistencies therein.

Ecology and its relevance to man, natural resources, their management and conservation. Physical and social
environment as factors of crop distribution and production. Climatic elements as factors of crop growth, impact
of changing environment on cropping pattern as indicators of environments. Environmental pollution and
associated hazards to crops, animals and humans.

Agro-climatic Zones of Bihar; Cropping pattern in different agro-climatic zones of the country-with special
reference to North Bihar, South Bihar, and Chotanagpur and Santhal Pargana plateau. Impact of high-yielding
and short duration varieties on shifts in cropping patterns in Bihar. Concept of multiple cropping, mixed
cropping, relay and inter-cropping and their importance in relation to food production. Package of practices for
production of important cereals, pulses, oilseeds, fibre, sugar and commercial crops grown during kharif and rabi
seasons in different regions of the country. Important spices crops of Bihar-chillies, ginger, turmeric and
coriander.

Processes and factors of solid formation, classification of Indian soils including modern concepts, Major soil
types of Bihar; Mineral and organic constituents of soils and their role in maintaining soil productivity. Problem
soils-extent and distribution in India; Problems of soil salinity, alkalinity and acidity and their management.
Essential plant nutrients and other beneficial clements in soil and plants, their occurrence, factors aftecting their
distribution, functions and cycling in soils. Symbiotic and non-symbiotic nitrogen fixation, Principles of soil
fertility and its evaluation for judicious fertilçer use; bio-fertilçers. Problems of Tal Diara and chour lands
inBihar, cropping system in such situations.

1. Foundation of the theory of organic evolution Lamarckism. Darwinism and the Synthetic theory, Human
evolution, biological and cultural dimensions, Microevolution.
2. The Order Primate.- A comprative study of Primates with special reference to the anthoropoid apes and
man.
2. (a) Place of Man among animals. – Pisces, Amphibia, Reptiles, Aves, Mamalia, clarification of Mamalia and
anthroids.
2. (b) A comparative analysis of anatomical similarities and dissimilarities in man and apes. Intelligence and
social life of monkey and apes.
3. Fossil evidence of human evolution.- Lemurids, Tamrioids, Poragpithicus, Prophilopithicus, pliopithicus,
Lemnopithicus, Procunsul, Driopithicus, Ramapithecus, Australopithecines, Australopithecus Africanus,
Plesianthropus transvalensis, Australopithecus, Prometheus, Paranthropus robustus, Homoertus and
Homosapiens.
4. Genetics; Definitaion- The Mendelian principles and its application to human populations. The effects of
nutrition, inbreeding and hy-bridçation.
5. (a) Definition of Race;- concept of pure race; race, nation and linguistic groups; race and cultural activities;
Racism and dangerous myth.
(b) Racial differentiation of Man and bases of racial classification morphological serilogical and genetic, Role of
heredity and environment in the formation of races.
(c) Bass/criterias of racial classification skin colour, Hair, stature, Head form, face form, nose, eye, types of
blood groups.
6. Varieties of the Modern Races of Man- the three major races and their sub-races, caucaosoids and its
subdivisions. Archaic caucosoid races, Mongoloids and its subdivisions, Negroids and its subdivisions. The
American Negros, a comparative study of their Physical genetic and intelligence, similarties and differences.
7. Races in India:-
1. Classification of Riseley with his criticisms
Classification of Haldon
Classification of Eickutodt
Classification of Guha
Classification of Sarkar
The Negrito Racial Elements In India

8. General Chemistry of ‘d’ block elements:
(a) Electronic configuration: Introduction to theories of bonding in transition metal complexes, crystal field
Theory and its modification; applications of the theories in the explanation of magnetism and electronic spectra
of meta complexs.
(b) Metal Carbonyls: Cyclopentadienyl, Olefin and acetylene complexes.
(c) Compoundes with metal- metals bonds and metal atom clusters.

Organization and deficiencies of Indian Money Market structure of assets and liabilities of commercial
banks – Achievements and failures of Nationalisation – Regional rural banks – Recommendations of the Tandon
(P.L) study group on following of bank credit, 1976 and their revision by the Chore (K.B) Committee, 1979 – An
assessment of the monetary and credit policies of the Reserve Bank of India- Constituents of the Indian Capital
Market – Functions and working of All India term financial institutions (IDBI. IFCI. ICICI and IRCI) –
Investment policies of the Life Insurance Corporation of India and the Unit Trust of India – Present State of stock
exchanges and their regulation .

Provision of the Negotiable instruments Act, 1881. Crossings and endorsements with particular reference to statutory protection to the paying and collecting bankers – Salient provision of the Banking Regulation Act, 1949 with regard to chartering, supervision and regulation of banks.

1. Nature of the Indian Constitution’ the distinctive features of its federal character.
2. Fundamental Right; Directive Principles and their Relationship with Fundamental Right; Fundamental
Duties.
3. Right to Equality.
4. Right to Freedom of Speech and Expression.
5. Right to Life and Personal Liberty.
6. Religious, Cultural and Educational Rights.
7. Constitutional position of the President and relationship with the Council Ministers.
8. Governor and his powers.
9. Supreme Court and high Courts, their powers and jurisdiction.
10. Unon Public Service Commission and State Public Service Commission:
their powers and functions.
11. Principles of Natural Justice.
12. Distribution of Legislative powers between the Union and the States.
13. Delegated legislation its constitutionality. Judicial and legislative controls.
14. Administrative and Financial Relations between the Union and the States.
15. Trade. Commerce and Intercourse in India;
16. Emergency provisions.
17. Constitutional safeguards to Civil Servants.
18. Parliamentary Privileges and immunities.
19. Amendment of the Constitution.

The candidate should make a study of the development of the field of management as a systematic body of
knowledge and acquaint himself adequately with the contributions of leading authorities on the subject. He
should study the role, function and behaviour of a manager and relevance of various concepts and theories to the
Indian context. Apart from these general concepts, the candidate should study the environment of business and
also attempt to understand the tools and techniques of decision making.

National Income, analysis and its use in business forecasting. Trends and structure in Indian Economy,
Government programmes and policies. Regulatory Policies: monetary fiscal and planning, and the impact of such
macro-policies on enterprise decisions and plans-Demand analysis and forecasting, cost analysis, pricing
decisions under different market structures – pricing of joint products, and price discrimination – capital
budgeting – applications under Indian conditions. Choice of projects and cost benefit analysis choice of
production techniques.